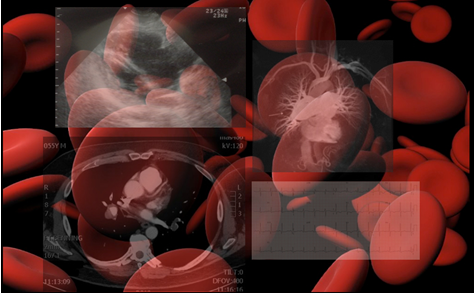 Massive transfusion is arbitrarily defined as the replacement of a patient’s total blood volume in less than 24 hours, or as the acute administration of more than half the patient’s estimated blood volume per hour.

Control of bleeding is the single most important intervention.

A: Use a clinical prediction rule to stratify the need for MTP:

Lab team need to know early – they will need to prep products and process your incoming blood samples.

Early thawing of 2 units FFP if large volumes are expected.

Orderly to run samples and bloods to the lab for processing.

Scribe to document the products / volumes and response.

Crystalloids – aim to minimise the use of crystalloids – they will make your coagulopathy, temp and possibly acidosis worse.

NOTE: thawing FFP takes ~ 30 minutes – so you need to alert the lab to this possibility early. 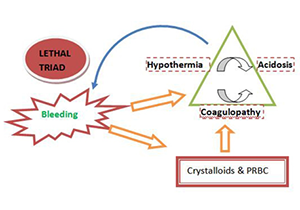 B :  Monitoring – establish early and use to titrate specific agents / interventions

STEP 6: Consider other agents for prevention / limitation of coagulopathy

Obstetric haemorrhage: early use of cryoprecipitate is recommended.

Platelets: only recommended in thrombocytopenia < 50,000.

Tranexamic acid:  give 1 g loading dose (over 10 mins)  as early as possible in traumatic bleeding.

Give 2u FFP  consider Prothrombinex

Give 8 units of cryoprecipitate

The use of Recomb:

Factor VII remains controversial – this should only be used in consultation with Haematologist and once other reversible causes of coagulopathy have been addressed / targets reached.

In smaller centres the early evacuation planning should commence as soon as the patient is received.

In the absence of a definitive surgical service – evacuation should be expatiated to such a centre.

The retrieval team should be made aware of the product availability and stock so they can plan to bring further agents for the ongoing resuscitation / transfer.

6. Management of Obstetric Haemorrhage Anaesthesia Tutorial of the Week – 257 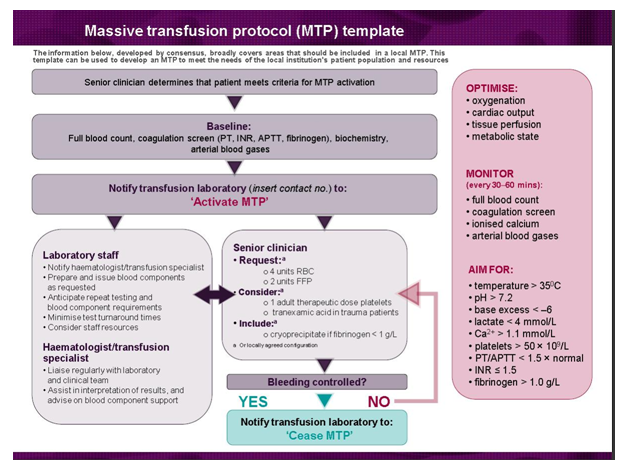 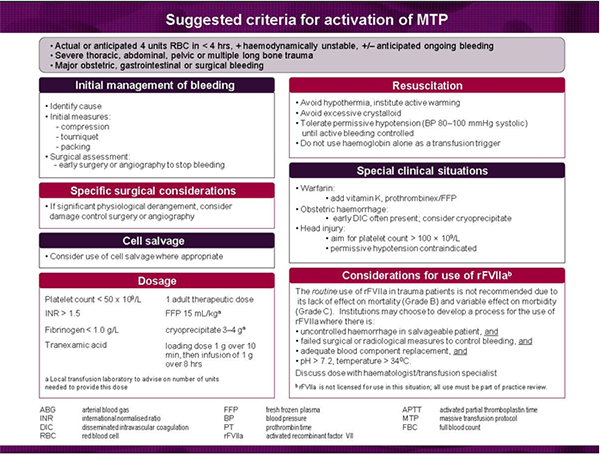 Central line in the Carotid..What to do ..Push..Pull..or Leave it 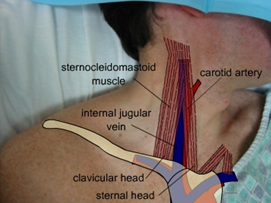 Percutaneous catheterization is a frequently-used technique to gain access to the central venous circulation. Inadvertent arterial puncture is often without consequence, but can lead to devastating complications if it goes unrecognized and a large-bore dilator or catheter is inserted.

Several studies have reported the incidence of arterial cannulation to be between 0.1-1.0%.

The most common injury to arteries is related to puncture or cannulation of the carotid artery. Puncturing the carotid artery with a small needle occurs in about 6% of all procedures and, although undesirable, does not generally produce any harm. However if the arterial puncture is not recognized and a guidewire is placed into the artery and followed with a CVC or a pulmonary artery catheter introducer sheath there is the possibility of a major problem.

Ultrasound and pressure waveform measurement are two commonly used methods to reduce the chances of injury to the carotid artery.

Several of the specific findings of the Guilbert et al. study are worth noting:

Arterial cannulation can occur despite the use of ultrasound guidance.

The low internal jugular approach can injure the subclavian or innominate arteries or even the aorta. Arterial injury below the sternoclavicular joint cannot be repaired through a cervical approach. Clinical suspicion of an intrathoracic injury should prompt imaging to locate the site of injury and plan surgical or endovascular treatment.

Prolonged arterial cannulation can result in thrombus formation and stroke.

A normal carotid duplex exam following removal of a catheter from the carotid does not rule out the possibility of a stroke. Because of this, postponing elective surgery has been recommended to avoid unrecognized stroke in an anesthetized patient.

Proposed algorithm for cervical or thoracic arterial injury with a large-bore catheter:

Management Of Patient With Suspected Bronchospasm 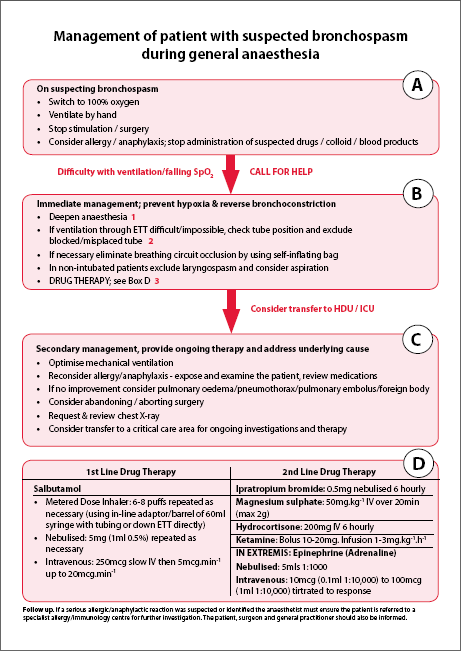 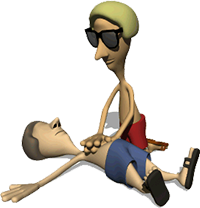 Fundamental aspects of BLS include

Activation of the emergency response system

The 2010 AHA Guidelines for CPR and ECC once again emphasize the need for high-quality CPR, including

A compression depth of at least 2 inches (5 cm) in adults and a compression depth of at least one third of the anteroposterior diameter of the chest in infants and children(approximately 1.5 inches [4 cm] in infants and 2 inches[5 cm] in children). Note that the range of 1½ to 2 inches is no longer used for adults, and the absolute depth specified for children and infants is deeper than in previous versions the AHA Guidelines for CPR and ECC

Allowing for complete chest recoil after each compression

Adult BLS Skills: The sequence of BLS skills for the healthcare provider is depicted in the BLS Healthcare Provider Algorithm 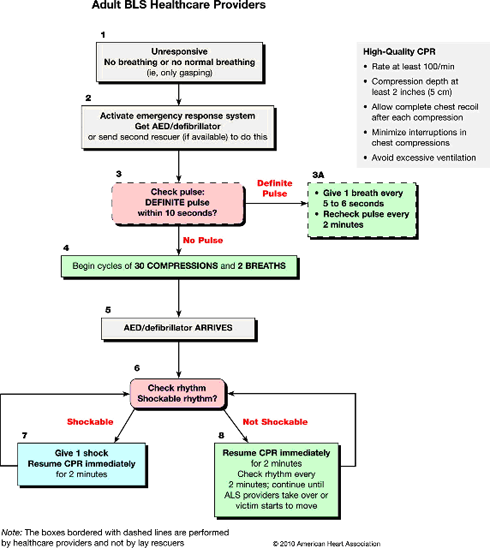 Summary of Key BLS Components for Adults, Children and Infants 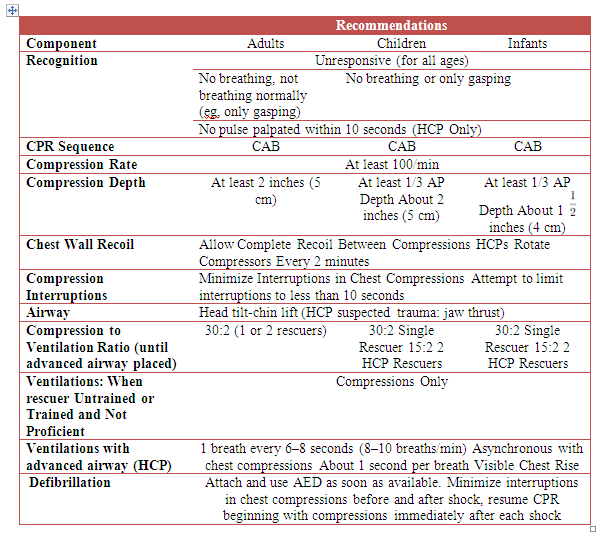 Key changes from the 2005 ACLS Guidelines include:

Cardiac arrest algorithms are simplified and redesigned to emphasize the importance of high-quality CPR.

Atropine is no longer recommended for routine use in the management of pulseless electrical activity (PEA)/asystole.

There is an increased emphasis on physiologic monitoring to optimize CPR quality and detect ROSC (Return of Spontaneous Circulation). Rhythm assessment using ECG and pulse checks as the only physiologic parameters to guide therapy. (Monitoring of Petco2, coronary perfusion pressure (CPP), and central venous oxygen saturation (Scvo2) provides valuable information on both the patient’s condition and response to therapy).

Chronotropic drugs (dopamine, epinephrine, and isoproterenol) infusions are recommended as an alternative to pacing in symptomatic and unstable bradycardia.

Adenosine is recommended as a safe and potentially effective therapy in the initial management of stable undifferentiated regular monomorphic wide-complex tachycardia. The new circular algorithm is introduced in 2010 emphasizes the importance of high-quality CPR. 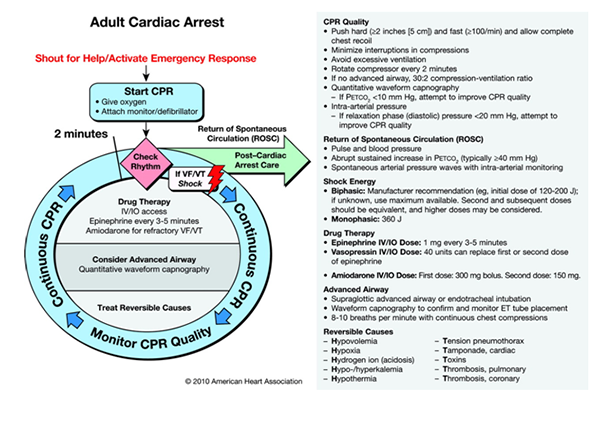 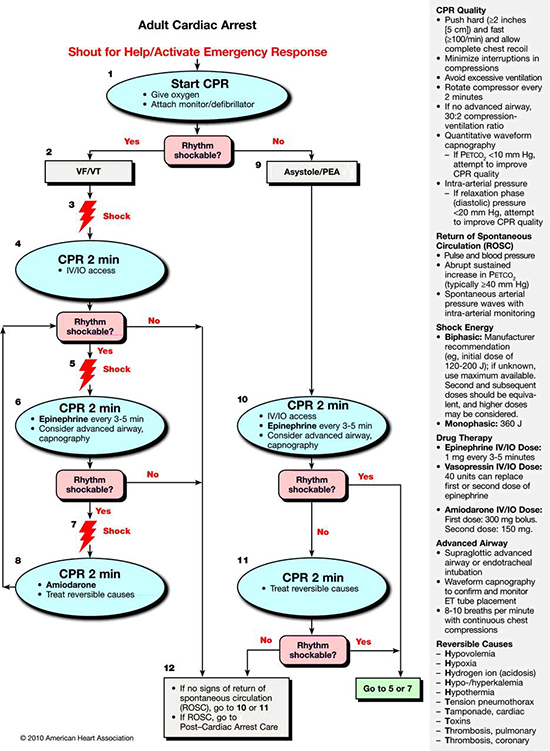 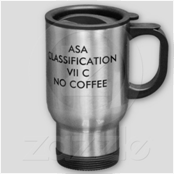 History
Original definition by Saklad et al. In 1940-41, ASA asked a committee of three physicians (Meyer Saklad, M.D., Emery Rovenstine, M.D., and Ivan Taylor, M.D.) to study, examine, experiment and devise a system for the collection and tabulation of statistical data in anesthesia which could be applicable under any circumstances. They were given the task to devise a grading system to assess the operative risk, but after detailed studies research and discussion they stated that “In attempting to standardize and define what has heretofore been considered ‘Operative Risk’, it was found that the term … could not be used. It was felt that for the purposes of the anesthesia record and for any future evaluation of anesthetic agents or surgical procedures, it would be best to classify and grade the patient in relation to his physical status only.” They described a six-point scale, ranging from a healthy patient (class 1) to one with an extreme systemic disorder that is an imminent threat to life (class 4). The first four points of their scale roughly correspond to today’s ASA classes 1-4, which were first published in 1963.The original authors included two classes that encompassed emergencies which otherwise would have been coded in either the first two classes (class 5) or the second two (class 6). By the time of the 1963 publication of the present classification, two modifications were made. First, previous classes 5 and 6 were removed and a new class 5 was added for moribund patients not expected to survive 24 hours, with or without surgery. Second, separate classes for emergencies were eliminated in lieu of the “E” modifier of the other classes.

Source: Grading of Patients for Surgical Procedures Saklad, Meyer M.D. Anesthesiology: May 1941 – Volume 2 – Issue 3 – ppg 281-284 In 1961, Dripps et all proposed a classification consists of 5 categories. The new classification was amended by the 1962 House of Delegates of American Society of Anaesthesiologists,Inc. Two modifications were made in the new classification, the previous classes 5 and 6 were removed and a new class 5 was added for moribund patients not expected to survive 24 hours, with or without surgery. In addition emergency cases were designated by the letter ‘E’. The sixth class is a recent addition for declared brain dead organ donors.

E. Emergency surgery, E is placed after the Roman numeral. The inconsistency and inadequacy of ASA grading system has been questioned for many years. The major drawbacks of this grading system are

Inconsistency of grading between anesthetists.

Age; is not considered as an influencing factor, extremes of age like elderly patients and neonates may have poor tolerance to surgery and anaesthesia in the absence of systemic illness and cannot be considered as ASA 1 patients.

The grading system is not well suited for assessing physical status of special  clinical conditions like burns, trauma and metabolic disorders.

No grade was available to describe moderate systemic illness.

Tomoaki and Yoshihisa reported that it is difficult to estimate whether the class II patients have an accurate risk ranging from mild to moderate-severe systemic disorders since the ASA class II is very broad and does not accurately reflect the patients’ risk. They assessed 1933 patients scheduled for surgical procedures both by 5-grade ASA physical status protocol and by their new 7-grade preoperative status assessment dividing classes I and II into a and b. SA Physical Status (7-grade) can provide a better grading outcome for predicting the incidence of intra- and postoperative complications in surgical patients. 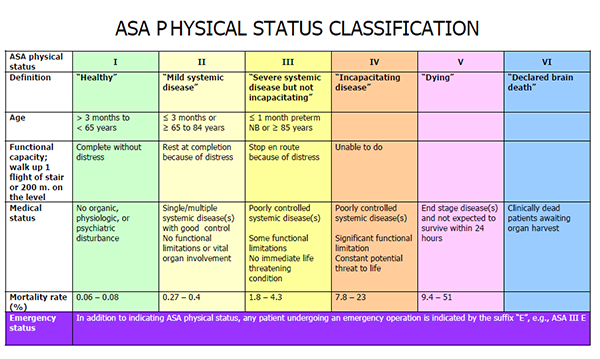 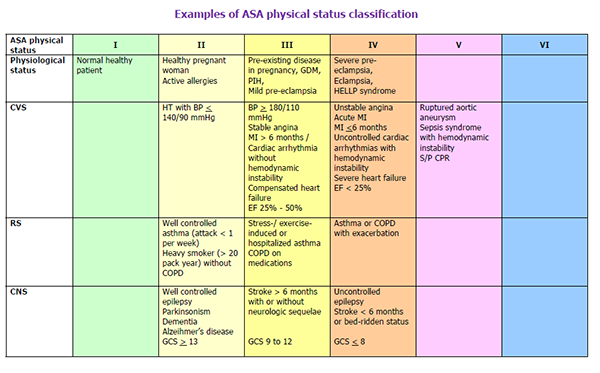 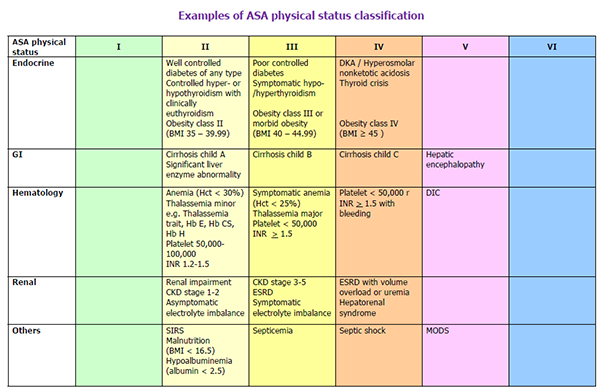