Death or permanent disability from anaphylaxis in anaesthesia may be avoidable if the reaction is recognised early and managed optimally Recognition of anaphylaxis during anaesthesia is usually delayed because key features such as hypotension and bronchospasm more commonly have a different cause. If anaphylaxis is suspected during anaesthesia, it is the anaesthetist’s responsibility to ensure the patient is referred for investigation. Anaphylaxis is a severe, life-threatening, generalized or systemic hypersensitivity reaction. The following guidelines to be applied in suspected anaphylactic reactions associated with anaesthesia. 2007 Scandinavian Clinical Practice Guidelines, the 2008 Resuscitation Council UK guidelines and the British Society for Allergy & Clinical Immunology (BSACI) guidelines. Causes Individuals with a history of atopy, asthma or allergy to some foods appear to be at increased risk of latex allergy. Patients with asthma or taking b-blocking drugs may suffer a more severe reaction.

Neuromuscular blocking agents (NMBAs) – The quaternary ammonium ion is identified as the allergenic epitope, and is shared by all NMBAs, morphine, pholcodine and other morphine/codeine analogues.

Thiopental Symptoms and diagnosis Cutaneous symptoms, such as flushing, urticaria and oedema, are common, but, during anaesthesia, these are usually hidden by surgical drapings.

Severe arrhythmias and cardiovascular collapse if not recognised and treated.

Pulmonary oedema Classification of clinical manifestations of anaphylaxis during anaesthesia

BSACI guidelines for the investigation of suspected anaphylaxis during general anaesthesia 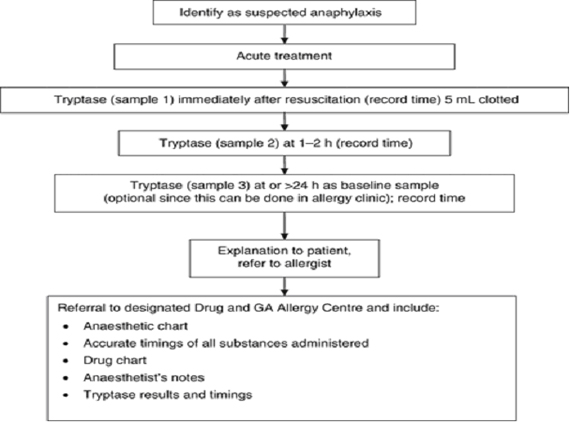 A 30-yr-old woman was scheduled for surgical correction of tubal sterility. She did not suffer from any atopy. After 1 h of uneventful anesthesia (midazolam, sufentanil, propofol, atracurium) and surgery,an intrauterine 1% methylene blue instillation was administered to verify tubal permeability. Within 2 min after methylene blue instillation,there was a marked decrease in Spo2 to less than 80% and an end-tidal carbon dioxide concentration (18 mm Hg) together with a decrease in arterial blood pressure (60/26 mm Hg) associated with a tachycardia (140 bpm). At the same time, the patient developed a severe bronchospasm. All these symptoms were relieved by titrated epinephrine injections (total dose, 1.8 mg), intravascular fluid administration, salbutamol spray, and 40 mg methylprednisolone. When hemodynamic stability was restored, a generalized urticaria became apparent. The patient continued to require epinephrine for 18 h to maintain cardiovascular stability but was discharged home after a few days without sequelae. Plasma histamine level measured to confirm onset of histamine release was markedly increased to 700 nmol/L (normal 10 nmol/L). Six weeks later cutaneous tests to methylene blue was positive whereas cutaneous tests to latex and to all other drugs were negative. To confirm the responsibility of methylene blue, in vitro leukocyte histamine release assay (3) was performed with methylene blue and was positive. Interestingly, methylene blue inhibits guanylate cyclase, thus decreasing cyclic guanosine monophosphate and vessel relaxation in vascular smooth muscle, and it has therefore been proposed for use in hypotensive septic shock patients or as a lifesaving alternative drug for contrast-medium induced anaphylaxis to restore arterial blood pressure.

Severe Anaphylactic Shock with Methylene Blue Instillation
A & A July 2005 vol. 101 no. 1 149-150 Methylene blue for clinical anaphylaxis treatment: a case report A 23-year-old female suddenly presented urticaria and pruritus, initially on her face and arms, then over her whole body. Oral antihistamine was administered initially, but without improvement in symptoms and signs until intravenous methylprednisolone 500 mg. Recurrence occurred after two hours, plus vomiting. Associated upper respiratory distress, pulmonary sibilance, laryngeal stridor and facial angioedema (including erythema and lip edema) marked the evolution. At sites with severe pruritus, petechial lesions were observed. The clinical situation worsened, with dyspnea, tachypnea, peroral cyanosis, laryngeal edema with severe expiratory dyspnea and deepening unconsciousness. Conventional treatment was ineffective. Intubation and ventilatory support were then considered, because of severe hypoventilation. But, before doing that, based on their previous experience, 1.5 mg/kg (120 mg) bolus of 4% MB was infused, followed by one hour of continuous infusion of another 120 mg diluted in dextrose 5% in water. Following the initial intravenous MB dose, the clinical situation reversed completely in less than 20 minutes, thereby avoiding tracheal intubation. Previously the same team has treated nine patients who developed anaphylactic shock and/or anaphylaxis with an intravenous bolus of methylene blue (1.5 to 2.0 mg/kg) treatment. These observations do not allow it to be assumed that methylene blue would be the first-choice drug for anaphylactic shock.

Methylene blue for clinical anaphylaxis treatment: a case report
Sao Paulo Med. J. vol.125 no.1 São Paulo Jan. 2007 Methylene Blue revisited Methylene blue was identified by Paul Ehrlich about 1891 as a successful treatment for malaria. Methylene Blue was till now known mainly as a dye but is now entering into the field of cardiac surgery and critical care as a very important therapeutic agent with diverse applications. Methylene blue, an inhibitor of nitric oxide synthase and guanylate cyclase has many uses in medicine. It has been found to improve the hypotension associated with various clinical states like septic shock, Vasoplegic syndrome and hepatopulmonary syndrome. Physiology: The enzyme Guanylyl cyclase synthesizes cGMP. In smooth muscle, cGMP is the signal for relaxation, and is coupled to many homeostaic mechanisms including regulation of vascular and airway tone. Methylene Blue acts by inhibiting guanylate cyclase, thus decreasing C-GMP and vascular smooth muscle relaxation. It helps Methylene Blue to improve hypotension in anaphylaxis by decreasing vascular smooth muscle relaxation. Methylene blue does not interfere with Nitric Oxide release (not interfere with bronchospasm) but acts to block its action on vascular smooth muscles. The evidence for its use in methemoglobinemia is well established but that for its use in vasoplegia, septic shock, hepatopulmonary syndrome, malaria, ifosfamide neurotoxicity etc is limited but promising and commands more research.

Safety of perioperative beta-blocker use has not been adequately demonstrated   P. J. Devereaux, MD, PhD

The link between hypotension and death in POISE is consistent with findings from other largest beta-blocker trials undertaken.

Evidence does not support the use of β-blocker therapy

American College of Cardiology and American Heart Association (ACC/AHA) guidelines on perioperative assessment recommend perioperative β blockers for non-cardiac surgery, although results of some clinical trials seem not to support this recommendation. 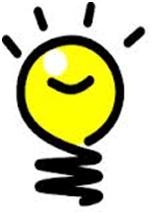 Perioperative Management of Patients with Prior PCI Undergoing Noncardiac Surgery

Copyright ©  2013 the British Journal of Anaesthesia

Algorithm for preoperative management of patients under antiplatelet therapy 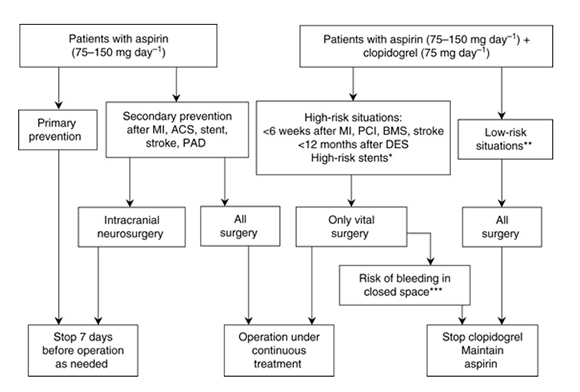 Copyright ©  2013 the British Journal of Anaesthesia

Monotherapy with aspirin need not be routinely discontinued for elective noncardiac surgery. Possible exceptions were intracranial surgery and prostatectomy.

Aspirin should only be discontinued if the known bleeding risks are similar or more severe than the observed cardiovascular risks of aspirin withdrawal.

ACC/AHA recommendation that clopidogrel should be withheld for at least 5 to 7 days in patients scheduled for elective CABG surgery.

The half-life of clopidogrel is 4 h and its plasma level is close to zero after 12 h (three half-lives). In emergency situations or in the case of major bleeding, therefore, haemostasis can be restored by administration of fresh platelets within a few hours of the last clopidogrel intake.

Non-steroidal anti-inflammatory drugs (NSAIDs) ibuprofen or indobufen inhibit COX-1 like aspirin, but their blocking action on platelet activity is reversible within 24 h. As platelet function is completely recovered after NSAID withdrawal, these drugs can be used to maintain an efficient antiplatelet activity during the week between aspirin cessation and surgery.

When and how to use bridge anticoagulation therapy for warfarin?

Give the last dose of LMWH approximately 24 hours prior to surgery.

For minor surgery, reinitiate LMWH at full dose approximately 24 hours after surgery. For major surgery and for patients at high risk of bleeding, consider using prophylactic doses on the first two postoperative days.

Discontinue LMWH when the INR is between 2 and 3 for 2 consecutive days.

Class I (Recommended) indication for perioperative beta-blocker use exists, for continuation of a beta blocker in patients already taking the drug.

Initiation of therapy, particularly in lower-risk groups, requires careful consideration of the risk: benefit ratio for an individual patient.

For patients currently taking statins and scheduled for noncardiac surgery, statins should be continued.

If the stenosis is severe, percutaneous catheter balloon valvotomy should be considered as definitive therapy or as a bridge to care for the patient through pregnancy, labor, and surgical delivery. Excessive changes in intravascular volume should be avoided

Pain management may be a crucial aspect of perioperative care.( Epidural or spinal opiates or patient-controlled analgesia techniques )

4.Perioperative Anticoagulation Management in Patients who are Receiving Oral Anticoagulant Therapy : A Practical Guide for Clinicians 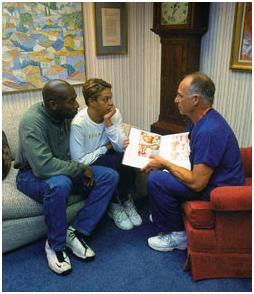 The legal and ethical requirements related to an anaesthetist’s communication with patients in preparing them for anaesthesia, assisting them in making appropriate decisions and obtaining consent in a formal sense are complex. Doing these things well takes time, skill and sensitivity. The primary focus should be to adequately prepare patients for surgery and to ensure that they are sufficiently well informed to make the choices that best meet their own needs.
Anesthesiologists, should consider the need to achieve informed consent in two symbiotic senses: the legal sense and the ethical sense.
The best way to fulfill both senses is to be vigilant in pursuing the spirit of informed consent. Establishing the patient‐physician relationship, tailoring the disclosure of risks, and making the patient a full partner in decision making will improve the quality of the informed consent process and, as a result, decrease the likelihood of litigation.
Standard Disclosure Requirements for Informed Consent

Factors which anaesthetists should consider when disclosing risks to patients

Skene L, Smallwood R. Informed consent: lessons from Australia. BMJ 2002; 324:39-41 Claims in negligence Liability in tort would only be imposed if:

The anaesthetist did not disclose a material risk (breach of the duty of care – failure to inform); and

The risk in fact eventuated so that the patient suffered harm (injury or loss); and

The patient was able to persuade the court that he or she would not have agreed to the procedure if informed of the risk in question (causation). You can download Anaesthesia Informed Consent as pdf or MS word format and modify according to your hospital need.

2. Consent for Anaesthesia Revised Edition 2006
The Association of Anaesthetists of Great Britain and Ireland